Highest TRP Telugu Movies List 2021: In TV entertainment platform, TRP rating is the the metric that tracks the films viewership. In other words TRP rating of a movie indicates the percentage of the target audience viewership and global reach on small screen. These metrics will be published by BARC India to promoted by the Indian Broadcasting Foundation (IBF). 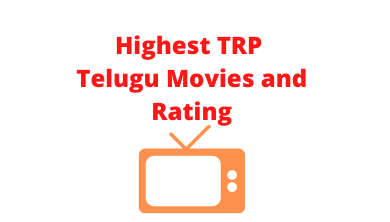 Though some films does not perform well at the box-office would do a better job on small screen. Below is the list of movies that have got Highest TRP ratings on TV. On this page, you are going to find the list of Telugu movies with Top TRP ratings of all time.

In the year 2020, many new movies have recorded highest TRP ratings ever. Movies like Ala Vaikunthapurramuloo, Sarileru Neekevvaru, Prathi Roju Pandage, Vinaya Vidheya Rama and more movies have achieved this feat.

Take a look at the list of Top 10 Telugu movies TRP ratings on the TV according to BARC i.e Broadcast Audience Research Council India.

This 2021 is the big year for TV and digital platforms due to of the prolonging Lockdown, audience hold on to the Online platforms and TV shows to find the right entertainment.

Ala Vaikuthapurramuloo directe by Trivkram Srinivas while the songs composed by SS Thaman has won the hearts of millions of music lovers across the world. The musical blockbuster movie attracted audience from other languages too.

Mahesh Babu’s Sarileru Neekevvaru is the only Tollywood film that has occupied top 2 and 3 places in highest TRP ratings of 2020. This film premiered on Gemini TV on the eve of Ugadi festival with a TRP of 23.4 rating.

In addition to the above list, you can also find the all time highest TRP Telugu movies till 2021.

Below are the list of Top Rated Dubbing Movies In it’s premiere Telecast in Telugu language. Have a look into these movies.

Does the Film’s Success Matters for Highest TRP in Tollywood?

No, Film’s success at Box Office doesn’t matter for highest TRP in Tollywood. Many flop movies of Tollywood have created TRP records on Telugu Television channels. Flop movies of Big stars like Athadu, Vinaya Vidheya Rama did this amazing feat on small screens.