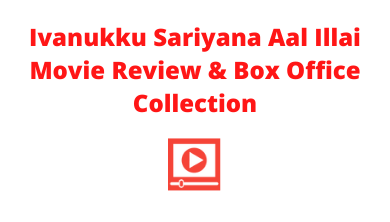 The film has been dubbed into Tamil and has massive hit over 220+ theaters across Tamil Nadu. After a long gap, Theaters have just reopened but big releases have not made their way to big screens. So, comedy entertainer films like Biskoth and Irandam Kuththu made their way to screens and succeeded in bringing the audience. Similarly, Ivanukku Sariyana Aal Illai movie also joined the list. Let us check the Ivanukku Sariyana Aal Illai Movie Review & Box Office Collection.

“Ivanukku Sariyana Aal Illai” is an action comedy entertainer that succeeds on almost every level, one of the best film to watch with family and friends. As per critics, the film is very entertaining and a ‘worth watch‘ movie.

Although the Telugu version of the film Sarileru Neekevvaru grossed Rs 230 crore, the market for dubbed films in Tamil Nadu is quite low. However, movies from star heroes like Mahesh Babu can do well in the Tamil Nadu circuit.

Considering Mahesh Babu’s previous Box Office collection of films in Tamil, the film would make up to Rs.80 Lakhs Gross, it’s a great number for a dub film in Covid 19 pandemic.