Kavalthurai Ungal Nanban OTT Release Date: The most awaited Tamil film Kavalthurai Ungal Nanban all set to hit the screens on November 27, 2020. The film talks about various social issues mainly about the police brutality on innocent public. With the support of Ace director Vetri Maaran and producer Dhananjayan, the film has finally gets a grand release date. Creative Entertainers and Distributors will release the film on 27th November across Tamil Nadu state. 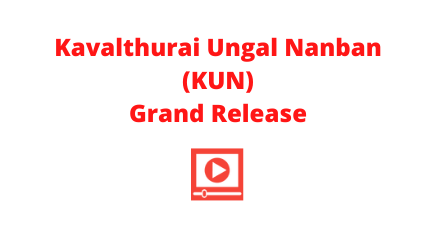 Kavalthurai Ungal Nanban (KUN) resembles the Vetri Maaran’s Visaranai but closely reflects many social issues and incidents taken place in Tamil Nadu. The film had a screening to top distributors of Kollywood and they are very happy with the output. Moreover, many celebrities and technicians appreciating the movie for its content.

The film has been cleared with an U/A certificate by the Censor Board and the makers have now revealed the Theatrical release date. The film starring VJ Suresh Ravi and dubbing artist Raveena Ravi in lead roles is all set to hit the screens on November 27.

The film has been awarded with “Best Film Jury” in Indian World Film Festival 2020 and many awards yet to come in the near future.

The film will hit the screens on November 27, 2020 across Tamil Nadu. Based on the screening to distributors and Kollywood film personalities, the film has the potential to be a huge success.

The movie has received positive reviews and rating through its special shows to film distributors, Film Critics and Media.

The OTT release date of the film is not yet confirmed. The digital rights of the film will be known only after its theatrical release. But, the movie will soon available on Tentkotta for binge watchers outside India.

We will soon update this section with satellite rights of Kavalthurai Ungal Nanban. So, Watch this space regularly for official confirmation.