The movie is supposed to hit the screens on May 08, 2020 but due to the COVID-19 pandemic the film was postponed. However, the movie released with huge expectations on Pongal and declared as the first Blockbuster Telugu movie in 2021. As we all know, Ravi Teja has a strong hold on Sankranthi festival season, all his previous films released during Sankranthi were big Hits. So, we can expect the same luck for Krack (2021).

With the reopening of Theaters in India, slowly Tollywood makers planning for Theatrical releases. With the success of Krack movie, there has been a strong confidence among Tollywood producers and distributors. The movie has made more than 30 crore share worldwide and now its ready for world digital premiers on Aha App from 05th February, 2021.

Leading digital streaming platforms Amazon Prime Video and Disney+ Hotstar were rumored to be their first choice but finally Telugu dedicated OTT Platform Aha Video confirmed as the makers final choice to stream Krack movie in OTT. The movie supposed to hit the Aha digital platform on 29th Jan but with the strong hold on Theaters the OTT release date of Krack has been postponed from January 29 2021 to February 05, 2021. Below is the official note from Aha regarding the change in digital release date. 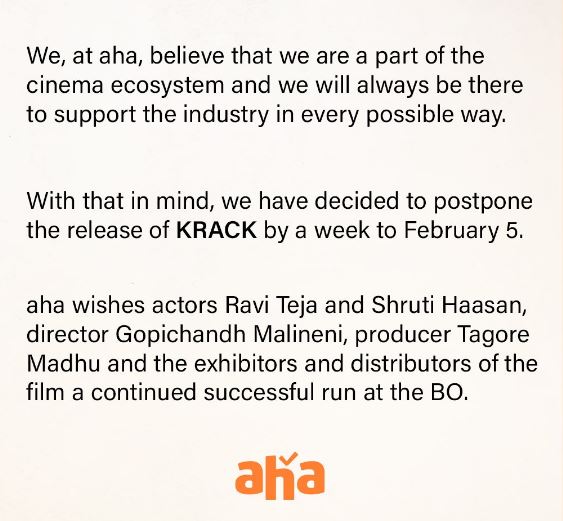 As per the available information, the Theatrical rights, Satellite Rights and Digital rights of the film are as follows. The Aha OTT rights sold for 7 Crore while the satellite sold to Star Maa Television channel for Rs.6 Crore.