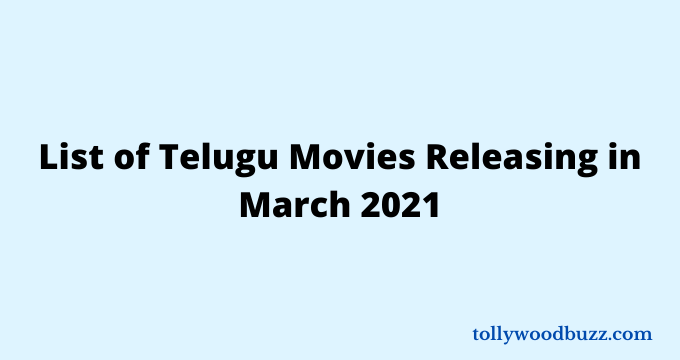 As we all know Summer Season in India enters in March month and there will be Holidays for schools and colleges. So, many of the filmmakers targets March and the whole Summer season to release their movies. Similarly, many Tollywood producers have scheduled release dates of their upcoming movies in March 2021. Let us have a look into the list of popular releases in March month.

Sandeep Kishan’s upcoming film A1 Express scheduled for theatrical release in March, 2021. This is a Sports Drama based on Hockey starring Sundeep Kishan and Lavanya Tripathi in lead roles.

Telugu sci-fi thriller Play Back directed by Hari Prasad Jakka, all set to hit the theaters on March 5th, 2021.

Sreekaram is the upcoming Telugu film locked for March 11, 2021 release. The film starring Sharwanand, Priyanka Arul Mohan in lead roles. Under the direction of Kishore B and 14 Reels Plus production the movie has been scheduled for Worldwide release.

Jathi Ratnalu is an upcoming Indian Telugu comedy-drama film written and directed by Anudeep K V and produced by Mahanati Nag Ashwin under the banner of Swapna Cinema. Jathi Ratnalu is the second film for Naveen Polishetty in the main lead, Radhan as the music director. We can expect the film release in February, 2021.

Saikumar son Aadi’s upcoming film “Sashi” scheduled for a theatrical release on February 12, 2021. This is a love drama, already released songs are in trending on YouTube for some time.

Rang De is an upcoming Telugu romantic film scheduled for March 2021 release. Written and directed by Venky Atluri while produced by Suryadevara Naga Vamsi under the banner of Sithara Entertainments. The film features Nithiin and Keerthy Suresh in lead roles

Aranya is the PAN Indian film directed by Prabhu Solomon while produced by Eros International. The film deals with the real life events of conservation of elephants.

After the super success of Mathu Vadalaraa, Keeravani son Simha is coming back with “Thellavarithe Guruvaram” in March 2021, The movie will have a Worldwide Grand Release on March 27, 2021.