Top 5 Telugu Movies in November 2020: November is the biggest month for Telugu Cinema after quite a long time, the no.of new releases in the Diwali month has been tremendously increased. More than 10 Telugu movies released on various OTT platforms and most of them are successful. On this page, we are going to see the list of top 5 Telugu movies in OTT right now. 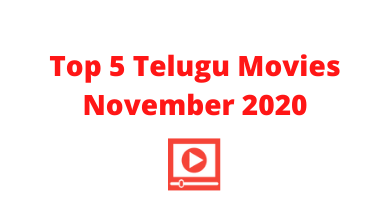 Aakasham Nee Haddhu Ra occupies the first place of November Telugu releases. If you are looking for a classic, then you should not miss this film. The movie comes with best performances from actors like Suriya, Aparna Balamurali, Urvasi, Mohan Babu among others. The movie is not only the top film of November, also occupied the No.1 chair of 2020 With IMDB rating of 8.9/10

There are only a few films which can influence the film novice and aspiring filmmakers, Andhakaaram belongs to that category. V. Vignarajan designed the screenplay in such a way that gives a new experience to binge watchers. The performances of Vinod Kishan, Arjun Das, Pooja Ramachandran and Kumar Natarajan brought genuineness to their characters. The movie is available in both Telugu and Tamil languages on Netflix.

Gatham is the most engaging Telugu Thriller film starring Bhargava Poludasu, Rakesh Galebhe, and Poojitha Kuraparthi in lead roles. The movie is completely shot in US with Telugu people over there. The film is released on November 06, 2020 in Amazon Prime video and stands in the top 10 movies list of India.

Though it is a Original from Aha OTT, the film is successful in its content. Anaganaga O Athidhi is a Telugu concept film starring Payal Rajput, Chaitanya Krishna, Veena Sundar and Ananda Chakrapani in important roles. The film rotates among these four characters and their actions, One of the best concept film in Aha.video